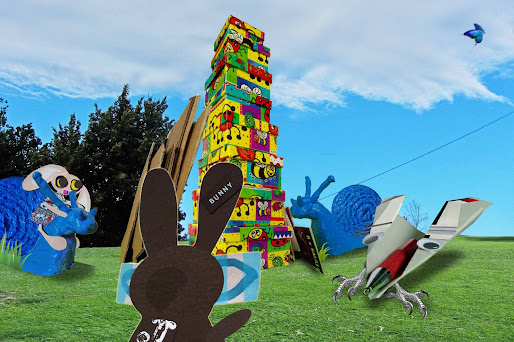 They watched the last butterfly head out, but when they turned back, the Spieler and his stall had vanished. In its place was a tower and a generous supply of cardboard. "Yummety yum," said Mo as they feasted. "We will take some of the Cardboard City back," said To with a burp and he tried to eat it all. "When you're quite finished," said a voice. The Fake Vote had changed too. He stared directly at the Wabbit and rocked his stylish wings. The Wabbit narrowed his eyes. "Don't I know you from somewhere?" The Fake Vote lifted its nose. "Did you ever fly AeroFlotsy?" "I recall the sandwiches," nodded the Wabbit gravely. His nose twitched at the thought of food and he was about to mention he could smell chocolate - but the Fake Vote sounded slightly irritable. "I had the devil's own job getting you here." Lapinette waved from Mo's back. "You weren't chasing us?" The Wabbit laughed carefully. "You were directing us, not pursuing us." "It was my job," said the Fake Vote. "I was supposed to make sure the vote was fair, but I got sealed in a box of fake votes and put in a Jeep with the real ones." "Go on," said the Wabbit. "The ballot boxes were to be substituted and the fake votes taken to the count," said the Fake Vote. "But the jeep went over a cliff and all the votes with it." "And you," said the Wabbit. "And me," smiled the Fake Vote ruefully. "Anyway you rescued me, so perhaps there's some way I can help you." The Wabbit glanced at Mo and To. "We seek the Holy Snail."
at June 04, 2015