8. The Wabbit and the Inside Out 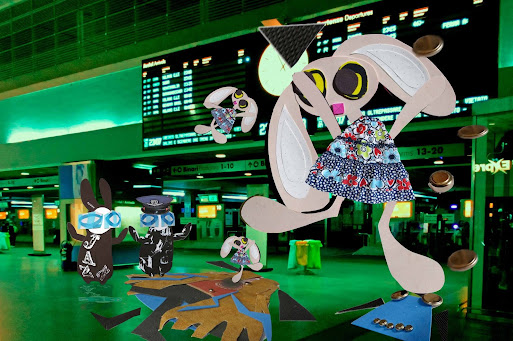 Wabsworth linked paws with the Wabbit and they both chanted. "Nissa nissa nissa nissa." They were relentless. The Shaman collapsed on the station floor and deflated like a bag of old breath. Then something moved inside the cloak as if it was trying to get out. "Chant Wabsworth, chant!" yelled the Wabbit. "Nanna hey, nanna hey, nanna hey ho," chanted Wabsworth and they both hopped from one foot to another. The figure was small but grew every second as the Wabbit and Wabsworth danced round in a never ending circle. Now they could see who the figure was. "Get me out of here! On the double!" yelled Lapinette in a squeaky voice. The Wabbit pulled Wabworth's paw and they went round again. "Etlay erhay ogay! Etlay erhay ogay " Lapinette spun through the air - along with a hat, an assortment of batteries and an impatience at bursting point. "I'll take him apart at the seams!" She landed with a wallop that was far from graceful and turned to look at the remnants of the Shaman. The Wabbit shrugged. So did Wabsworth. "Is she full size now?" whispered Wabsworth. "I never answer questions about size," murmured the Wabbit. Lapinette shook a paw at the costume but the Wabbit looked very suspicious. "Are there any more in there?"   "I heard voices," said Lapinette. Wabsworth gazed enquiringly and Lapinette grinned. "Sounded like the Swingle Singers." The Wabbit's eyes suddenly twinkled. "Let's leave them ..."
at June 26, 2015