13. The Wabbit and the Holy Snail 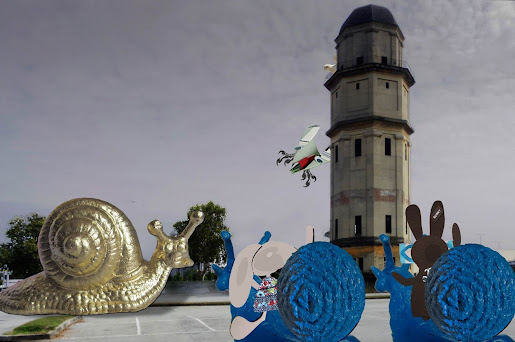 Flying overhead, the Fake Vote led them to the Holy Snail - and it was exactly where they started. The MoTo Snails thought themselves very punk indeed, but for once they were lost for words. "Your Holiness," stammered Mo. The Holy Snail shimmered in the strange light. "Did you bring me any cardboard?" he murmured. "Please approach and I will bless it and eat it." The Wabbit knew Mo and To had eaten all the cardboard. But secretly he had stashed a small piece in his fur because it had a strange shape. He passed it to To then called up to the Fake Vote. "Can you explain something?" The Vote shook his wings and swooped round the Old Abandoned Tower. "What about the Warplane?" yelled the Wabbit. The Vote shook his nose. "What plane?" The Wabbit sighed because he knew what was coming and he shouted, "It dropped the ballot boxes on the railroad and you were in one." "I'm afraid I was in the dark at the time," said the Vote. "Then we're both in the dark about that one," said the Wabbit, "but was it an enemy or a friend?" "Hard to tell sometimes," said Lapinette for the second time that trip. The Holy Snail interrupted. "When something sinister means to be your enemy, it starts by being your friend." Silence fell and the hum of the nearby underpass seemed to get louder. Mo and To spoke sadly. "Our Quest is over." The Wabbit shook his head thoughtfully. "No Quest is ever over."
at June 05, 2015