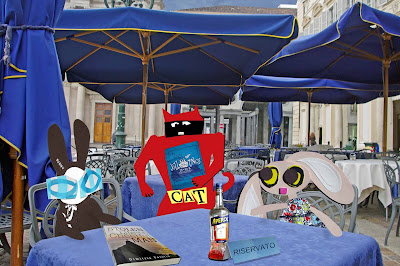 Lapinette and the Wabbit were about to order, when Skratch appeared from around the corner. "Ask me the question!" yelled Skratch in a theatrical manner. "I am not afraid!" Lapinette seemed nonplussed. "Hello Skratch," she murmured vaguely "What kind of Adventure did we just have?" Skratch purred. "It was free-wheeling road movie kind of Trek, with a Scottish flavour and a Cold War vibe." The Wabbit was looking at something else. "Someone left a book behind." "What's it called?" asked Lapinette. The Stolen Life of a Cheerful Man, said the Wabbit. "Oh," said Lapinette. "That is intriguing." "I'd better take it to Lost Property," said the Wabbit. He grasped the book but suddenly Lapinette was reading it. "I'll take it myself," she said. The Wabbit took it back. "I'm afraid I spilled wine on it and it must go to the cleaners." Lapinette screwed up her eyes. "What if I'm in it?" The Wabbit smiled. "Then you'll be cleaned too." They tried to out stare each other for some time without success. A red paw grasped the volume away. "There's my book," said Skratch. "I knew it was here somewhere." The Wabbit was suspicious. "Who wrote it?" Skratch straightened to his full height. "It's signed to me by the author, Dimitris Politis himself." Lapinette turned. "How would you describe it then?" "Distinguished," shrugged Skratch.
at June 08, 2015