12 The Wabbit watches from a Height 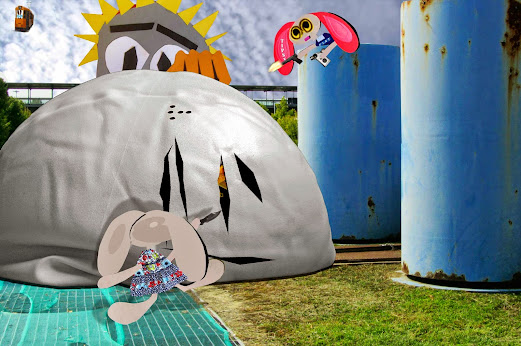 From his vantage point in the tram, the Wabbit could only wait and hope. But Lapinette easily hit Panico's palm dead centre, then flipped onto the ground with the edged weapon still in her paw. The Giant Ball dropped like a stone and showed signs of collapsing. Lapinette ignored faint hissing and turning on one foot, slashed again. She opened three more vents but couldn't see much inside. "Take it, Tipsy!" she yelled. Tipsy pulled out the automatic she'd borrowed from the Wabbit's secret dump, took careful aim and picked out one of her initials on the ball's surface. "Not so big now, you Ball!" she shouted. Lapinette thought she could hear something from deep inside. It was something she knew, but she couldn't place it. Panico shook a fist at the Ball and when nothing happened he shook it some more with a voice that sounded braver than he felt. "I've come to get you!" he said loudly. "Be most afraid and give up at once." But from the Ball there came not a murmur. Lapinette felt a sudden burst of impatience. "Tipsy, do you have any lighter fuel?" Tipsy not only had fuel, but possessed several serious lighters and a full kit of spare parts. She groped under her dress and something that looked like a flame thrower glistened in the dappled sun. "Come on out," she screamed, "or your Ball's toast."
at February 09, 2015