5. Lapinette, Jenny and the Switcheroo 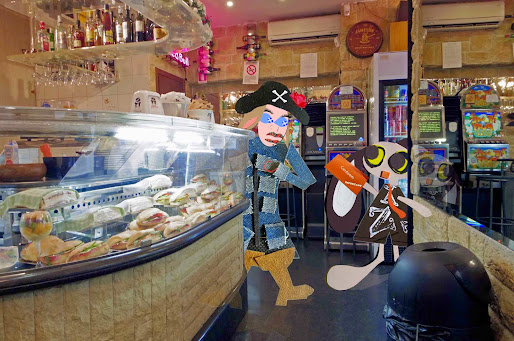 "Jenny!" gasped Lapinette. "I thought I'd find you here." Jenny looked at Lapinette's disguise with due regard. "Have you been trying to get into the Carrot Club?" Lapinette waved a letter. "Never mind that, we're having a meeting." Jenny raised both eyebrows. "This is an Emergency Meeting of the Artichoke Club. Now!" yelled Lapinette. "We haven't got a quorum," shrugged Jenny. Lapinette hopped up and down and waved the letter wildly. "I'm the Cardoom and this is Cardoom's Emergency Action." Jenny saw Lapinette was agitated and knew this to be unusual. So she ordered a rum and waited. Lapinette calmed. "I'm passing Cardoomship to you for a week." Jenny narrowed shrewd eyes. "So what do I have to do in this week?" "You'll give an official address to the Carrot Club." Jenny gave a pirate guffaw. "What do I say?" Now Lapinette fell silent because she hadn't a clue. The coffee machine hissed and gurgled. "Oh, make it up as you go along." Jenny nodded curiously. "Where is the Carrot Club?" "I'll introduce you," said Lapinette. "Just remember - my name is Bunky Green." "And you're some kind of boy," winked Jenny. Lapinette waved the letter again. Jenny took it and muttered. "What about the Wabbit?" "He's delighted," said Lapinette. "You know, in his pompous way." Jenny swayed backwards. "Will I address you as Bunky?" "Certainly not!" said Lapinette. "Call me Mr Green."
at February 25, 2015