The Wabbit hosts the Adventure Caffè 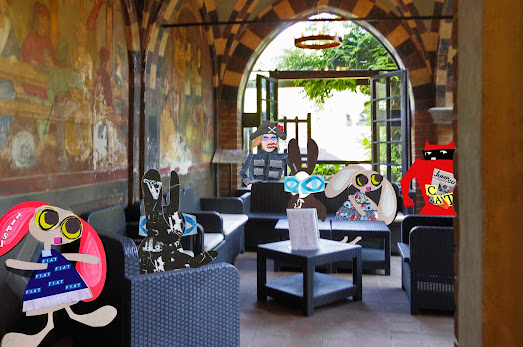 They gathered in a caffè by the river and waited for Skratch to arrive. In the interim, the Wabbit glared at Wabsworth and Wabsworth stared back. Lapinette tried to distract the Wabbit. "This is a nice place Wabbit, I didn't know it was here." "It's part of the Old Medieval Castle," muttered the Wabbit. Tipsy lurched against the wall and yelled, "Oh look it's Skratch!" Skratch purred his way into the throng. "Well that was quite an adventure." "What kind of adventure, though?" grinned Jenny. The Wabbit finally smiled. "I expect you're going to tell us about narratological repetition." "Not at all," said Skratch. "I'm going to tell you that repetition is an untranslated unconscious message." Finally Wabsworth spoke. "It was my job to bring that to consciousness." Lapinette crossed her legs. "So what was the message?" Wabsworth nodded sagely. "We're all preserved as individuals from moment to moment and that's repetition." "Who's buying the drinks?" yelled Tipsy. "Looks like John Paul Sartre." said Skratch. The Wabbit winked broadly. "Then we may have to wait a while, so I'll get them." He made a secret sign and glasses tinkled in the kitchens. "How did you do that?" asked Lapinette. "Practice," said the Wabbit. Lapinette looked sceptical because when it came to attracting the attention of waiters, the Wabbit was hopeless. "I come here every day," confessed the Wabbit.
at February 13, 2015