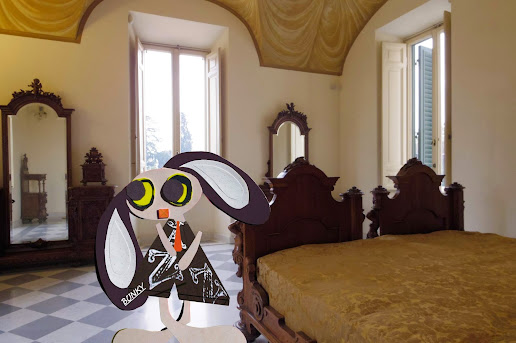 In the home of a dear friend, Lapinette rigged herself out in male gear. Convinced the Carrot Club was closed to females, she was determined to apply anyway. "One way or another," she mused, "I'll break down this bastion of male misogyny, this leaning tower of patriarchy, this ... " Lapinette couldn't think of any more names. But during her office as First Cardoon of the Artichoke Club, she had successfully facilitated key motions decrying gender inequality. These motions were all duly proposed, seconded, and unanimously passed. They were then ceremonially inscribed in the Grand Directory and celebrated with copious quantitities of Cynar Liqueur. But they went no further. Of all this, the outside world remained blissfully unaware. Lapinette straightened her carrot tie, which she had seized from the Wabbit's secret drawer of carrot accessories, and looked at her legs in the culottes she had made from an old coat. "Not bad," she murmured. "Now what about some laddish speech?" She placed her paws on her hips and winked at the mirror. "Carrot juice puts fur on your chest!" Then she patted her chest and pointed. "Let's go to the Carrotery, jump the juice and get legless." In her thoughts, things became frisky. "Let's find ourselves a couple of hot carrots." Lapinette sighed and returned to first principles. "My name's Bunky. I'm a boy."
[Cynar is an liqueur flavoured with herbs and plants, predominantly artichokes. Laddish: a young man who behaves boisterously]
at February 18, 2015