9. The Wabbit & the Tumbled Arrival 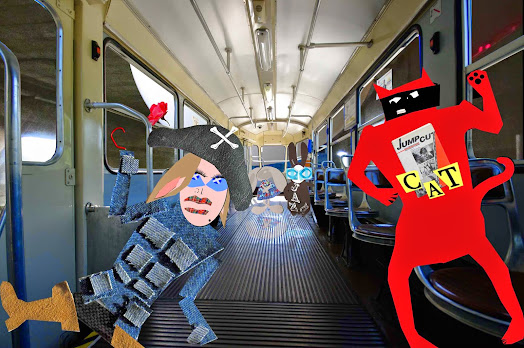 The Wabbit only had time to turn as Jenny and Skratch jumped. Skratch landed easily but Jenny cartwheeled and sprawled on the floor. With a hiss of compressed air, Nine's doors swept shut and suddenly everything stopped. The Giant Ball hung in the tunnel like a cut-out moon and all was still. "Red light," said Nine the Tram. "I engaged Late Tunnel mode." The Late Tunnel was a quantum space known only to Turin trams and a few cognoscenti. Few people knew their way into that space and even fewer found their way out. Skratch smiled at Jenny. "You've never been here, have you?" Jenny shook her head and dusted herself down. "I'm a pirate chief, not an underground surveyor." "Nor a circus acrobat," smiled the Wabbit. Lapinette stared at the Giant Ball. "I thought I saw something move." The Wabbit turned. "What kind of something?" Lapinette gazed at the Ball. "More like somethings." Now they all looked, but only Lapinette seemed able to see anything. So the Wabbit did something he seldom did. He fumbled in his fur for a hidden control unit and switched on his Blue Glasses. "I doubt if they'll work in here," said Nine. "This isn't a gadget space." Lapinette studied the Ball again. "They're very annoyed." "I know how it feels," said the Wabbit. He whacked his control unit on a grab handle and scowled. "Nine, I know how to deal with this," said Jenny softly. Everyone stared. "Ram it ..."
at February 02, 2015