13. The Wabbit and the Ball Question 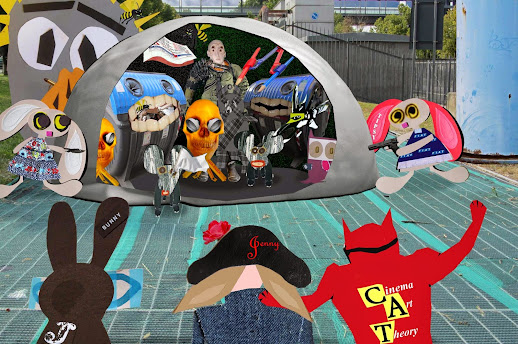 The Wabbit's team arrived just as a cry of "We surrender!" issued from inside the ball. Lapinette sliced away a cake-shaped portion and an Ice Mouse appeared with a white flag clenched in its jaw. "This wasn't supposed to happen," said a stern voice at the rear. The Wabbit gasped in amazement. "Alien Pilot. What the binky are you doing here?" Alien Pilot blinked all four eyes. "I'm afraid this is an art installation for your Museum of Enemies, Commander." The Wabbit began to bluster, so Lapinette waved her edged weapon. "We were not informed." Alien Pilot looked abashed. "It was interactive. That was the whole point." Lapinette noticed the Wabbit getting furious so she cut in. "Who's idea?" "It was Wabsworth," said the Alien Pilot. "He knew you'd be pleased." The Wabbit tapped a foot rhythmically in a fashion that even Tipsy found alarming. "Oh I am pleased," he growled. "Very pleased indeed. Any others that I should perhaps congratulate?" "Nine the Tram," said the Alien Pilot. A strange thing happened. The Wabbit's head tilted back and he started to guffaw. "Haw haw haw." The Wabbit's sides shook as he convulsed in helpless mirth, but he stopped suddenly. "Where's my souvenir?" Without warning Tipsy fired a single round. Panico caught the bullet between his teeth and threw it to the Wabbit. "All's well that ends well, Sir." The Wabbit laughed again. "The fun has only just started!"
at February 11, 2015