9. Boom boom for the Wabbit 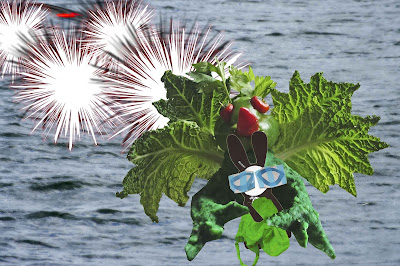 The Wabbit merely turned the bag upside down and the talking bomb dropped out, singing the while. "Everybody’s worried, about that talking bomb," sang the bomb, "but no-one ever worries about . .."  It never finished the verse. Four successive detonations boomed over the waves and the shock wave drove the dragon back on a course to home. "Boom, boom!" yelled the Wabbit. "Boom boom," said Terni the dragon in a nonchalant fashion. "We have turbulence, Dragon Heavy" shouted the Wabbit. "Pay no attention," said Terni as he zoomed inland. The Wabbit remained silent and for a while, all he could hear was the wind tearing at his fur. "Do you have any enemies?" The Wabbit could always hear Terni’s deep voice above anything the elements could offer. "Would you care to scan one of my lists?" replied the Wabbit. "Is it awfully long?" enquired Terni. "With several sub sections," said the Wabbit. "My goodness, do you always live in this adventurous manner?" asked Terni. "Sometimes we all stop for an aperitivo," said the Wabbit brightly. "Mine’s beer," said Terni. "The choice is yours," said the Wabbit, "my treat." Terni considered the matter. "Suddenly, food shopping seems a little dull," he said. The Department can always use a dragon on special secondment," said the Wabbit, secretly wondering how many meals he would have to buy to obtain the appropriate authority. "I’ll go through your list," said Terni, "and get your enemies down." "We’d all like that," chortled the Wabbit.
at September 25, 2012