10. The Wabbit is as good as his Word 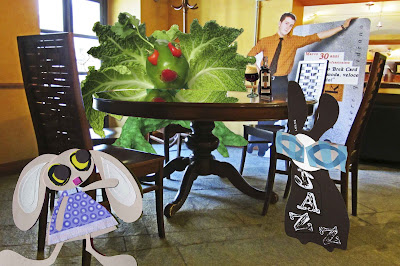 Terni the Food Dragon took the Wabbit at his word and headed directly to a restaurant in Turin. And the Wabbit was as good as his word because he immediately ordered an artisan beer, made in Terni’s homeland of Umbria. "What’s new?" called a voice. They both turned their heads to see Lapinette hopping quickly across to their table. "Well, hello fair damsel," said Terni and flapped his cabbage wings. Lapinette wasn’t certain about being called a damsel, but she smiled sweetly. "Are you’re the Dragon that flew across restricted airspace?" " I’m afraid so," sighed Terni. "Twenty times," added Lapinette. Terni grinned. "Am in I trouble?" "I reported UFOs," said Lapinette." "I suppose I am one," said Terni and looked at his beer. "They don’t mind dragons here?" he asked. "They’re very inclusive," said the Wabbit. "I even see Befana the benevolent witch in here." "Haven’t seen her for hundreds of years," said Terni. "She comes every day," said the Wabbit, "and if I’m here she gives me candy." "I prefer beer," said Terni. "You’ve had three already," warned the Wabbit and he searched in his fur for more lunch vouchers, only to find them stuck to some old sweets. "Wasn’t Terni supposed to get a barrel of beer as part of his transfer fee," observed Lapinette. "I forgot!" moaned the Wabbit and he slapped a sticky paw to his forehead. Terni fluttered his wings. "Who’s that fellow behind us?" "Just a cardboard cut out," said the Wabbit, "he’s advertising a loyalty card." "I’m loyal," said Terni. "Then I’ll just take your details," said the cut-out.
at September 27, 2012