The Wabbit and Film Criticism 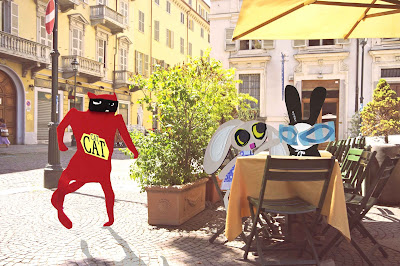 The wabbits met at a caffè they hadn’t been to before and sheltered from the baking sun. They had just begun to discuss what kind of adventure they had, when they saw Skratch hove around the corner. “You settle this Skratch," called the Wabbit. "You’ve been to lit-crit class," added Lapinette. "I’ve been perusing Jump Cut magazine," said Skratch. "Oh really?" muttered the Wabbit. "I thought that old film journal died with film criticism years ago!" "It’s online now," said Skratch, "and I’ve been reading about a film called Taxidermia  - the taxidermist was consumed alive by speed eating cats."  "Yuk!" said Lapinette and she tried desperately to change the subject. "I do like your new CAT logo, Skratch," she said. "It’s very striking." The Wabbit wrinkled his nose. "The serif isn’t quite right," he said. "I shot the serif," said Skratch. "What about his deputy?" asked the Wabbit. "I didn’t shoot no deputy," said Skratch, "just the serif. Is it a capital offence?" "No, not in self defence," said the Wabbit. Lapinette sighed. "What are you two on about?" she asked with an exasperated voice. "We were deciding what our War Games adventure could be called," said the Wabbit, "but we got diverted." "I think it was an ambivalent text that appealed to a broad audience, but despite its feminist pretensions it emerged somewhat flawed," said Skratch. “Everyone’s a critic," smiled the Wabbit. "There are no proper film critics any more," said Lapinette. "Definitely," said the Wabbit. "The new ones think Pasolini designed sunglasses."
at September 04, 2012