2. The Wabbit and the Food Dragon 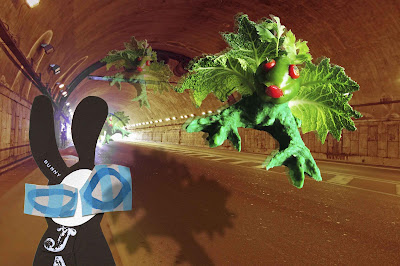 The Wabbit took a short cut through the tunnel that routed the Galleria Principe Amedeo di Savoia underground by the Vatican then down to the Tiber. The Wabbit thought that name was far too long for a tunnel and besides it was extremely polluted and rather unpleasant. So he pinched his nose to avoid breathing fumes and hopped quickly towards the other end. He was just half way through when he became aware of a periodic roaring but he shrugged it away, because he assumed it must be someone showing off a new Ferrari. "How vulgar," he muttered and carried on. Then he felt a strange heat at his back. "Hot day," thought the Wabbit, "especially in this tunnel," and he fanned his fur with both paws. Then a roaring echoed back and forward between the tunnel walls and a wind ruffled the Wabbit’s fur and made it prickle. "Must be a summer storm," thought the Wabbit and he carried on hopping. But for an instant he caught a whiff of fresh vegetables and being unable to explain this away, he glanced over his shoulder. A green dragon swooped through the tunnel at crazy angles, looming closer and closer. Suddenly the dragon screeched to a halt and looked at the Wabbit as if he were mad. The Wabbit shrugged and looked back as if he wasn’t. "Roar?" said the dragon.  "Grrr?" said the Wabbit, because he couldn’t think of a suitable utterance. "Roar!" bellowed the dragon and shot off. The Wabbit peered towards the exit as the dragon’s wings obscured the light and made everything dim, But then to his astonishment, he saw him swooping back. The Wabbit ducked as the dragon passed him again, then flinched as it circled round and picked him up by his ears. "This way," said the dragon.
at September 10, 2012