2. The Wabbit stays on the Road 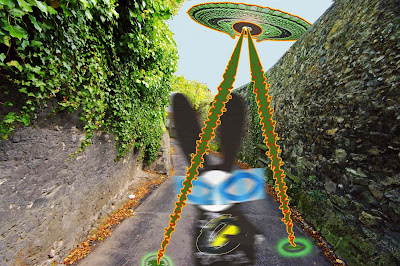 With the strange craft behind him, the Wabbit took off at speed. He knew the terrain but the craft had the advantage of height and could see everywhere the Wabbit went. So the Wabbit thought he may as well keep to the road and he dodged right and left to avoid the crackling beams that threatened to slice through his fur. "Keep right on to the end of the road," hummed the Wabbit to give himself company. It seemed to work, and he was able to quicken his pace and hum some more. "Though your heart be strong and the road be long, keep right on round the bend!" he hummed. The beams looked hot from a distance but when they came close the Wabbit felt an icy chill and he shivered. "I need to find cover and lose this annoying fellow," thought the Wabbit. "Cover, cover, cover. Where, where, where?" he asked himself. At the same time, the Wabbit was wondering why the Ice Mice had returned so close to his location. On their last encounter he and Ghost Bunny had given them a trouncing that they no doubt remembered. But there was something else. It was such an obvious something else that it completely eluded him. The Wabbit shoved this thought to the back of his mind, which was fairly capacious. "This is too countrified," thought the Wabbit. "I need the nooks and crannies of the city." "And controlled air space," said a voice from the back of his mind. The Wabbit made a left turn and headed for the depths of the city where he knew he belonged.
at May 05, 2012