4. The Wabbit and the Jolly Joker 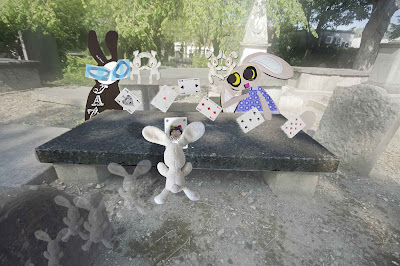 Suddenly the scene changed and the Wabbit and Lapinette found themselves behind a gravestone watching a different white rabbit hop towards them. "Another one," muttered the Wabbit who was beginning to get used to more and more rabbits. “Hop white rabbit, hop hop!” shouted the white rabbit and with a flick of his paw he threw several playing cards in the air. Lapinette and the Wabbit gazed at the cards that were now dancing a merry jig. The Wabbit thought for a moment then smiled. "Pick any card," he said to Lapinette, "but don’t let me see it." The Wabbit shut his eyes very tightly indeed and Lapinette put out a paw and grabbed the three of diamonds. "OK, tell me what it is," sighed Lapinette. "It's the three of diamonds," said the Wabbit quickly. "Oh!" sulked Lapinette and she looked at the Wabbit with a look she reserved for his magic tricks, because she knew that Wabbit could perform quite a few that he had learned from a book. He would take it upon himself to entertain guests at social gatherings and usually she chose that very moment to have an urgent appointment elsewhere. "It’s not a trick," said the Wabbit. "It’s the Fibonacci Sequence." "Then where,” asked Lapinette, "does that card fit?" She pointed to to the hopping rabbit and the Wabbit looked at him and then at the card the white rabbit had kept to himself. "That's a jolly joker," said the Wabbit. "It can fit anywhere." "Like us," smiled Lapinette. "Up to a point," smiled the Wabbit.
at May 25, 2012