8. The Wabbit in the Sombrero Galaxy 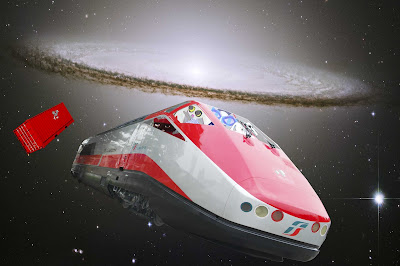 Quantum jettisoned the container of Ice Mice on the edge of the Sombrero Galaxy and all the gang cheered as they watched it spiral off into the distance. "I hope we've seen the last of these mice," said Skratch the Cat Burglar. "Somehow I doubt it," said the Wabbit. "There's a big black hole down there," said Lovely Lapinette. "A black mouse hole?" asked Skratch. Everyone laughed. "Now it's time for us to sing," said Quantum the Time Travelling Train. "Sing?" said Ghost Bunny in surprise. "We always sing," said Quantum. "Well only just the once before," said the Wabbit. "That's how traditions begin," said Quantum, "so you start, Commander Wabbit." "Oh all right," said the Wabbit and he put his paw to his ear in authentic folk fashion and adopted a nasal voice. "All around my hat!" he chanted. "I will wear the green willow," responded Quantum melodically and started a background music track. "All around my hat, for a twelve month and a day," sang Lapinette. "And if anyone should ask me," sang Skratch. "The reason why I'm wearing it," added Ghost Bunny. And then they all joined together and sang with gusto. "It's all for my True Love who is far far away!" And across billions of galaxies, trillions of light years away from the Sombrero Galaxy, space travellers picked up a strange signal on sub space communications. It was the sound of merry singing. And soon, over the vast universe, everyone was singing that self same song.
at May 16, 2012