1. The Wabbit & the Return of the Ice Mice 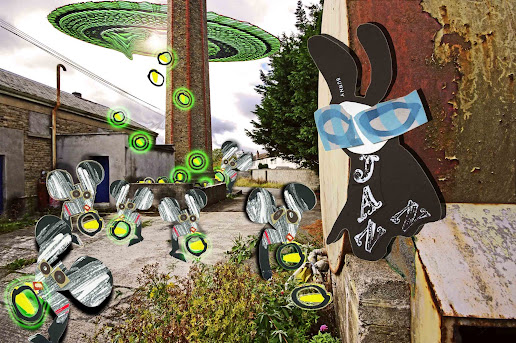 It was only by chance that the Wabbit was passing the Old Abandoned Laundry. He had just popped through the derelict gates to see if there was anything to see, when a shadow passed over him and he looked up to see a familiar craft. "Ice Mice!" he hissed and he crouched behind an old rusty tank. "I thought they had departed for a distant galaxy," mused the Wabbit. The Ice Mice either didn't see the Wabbit or ignored him, because they were intent on their task. They worked industriously to harvest the disks that fell from their craft and then bore them around with feverish haste. The Wabbit tried to work out what the disks were. They glowed, but not always. Some were bigger, some smaller. Some seemed heavier than others and they all made a sonorous ringing if dropped. The Wabbit could do little on his own, but he saw that one disk had rolled close and he wondered if he could reach it. He stretched and stretched - but it was just out of his grasp and when he nearly had it in his paw, it rolled slightly further way. "Accursed thing!" muttered the Wabbit under his breath. But under his breath was not low enough for the sharp ears of one Ice Mouse and it looked over at the Wabbit and squealed. All the Ice Mice turned to look. "Time to go!" thought the Wabbit and he grabbed the disk, tucked it into his fur and loped for the gate. The Wabbit outpaced the Ice Mice easily, but from the corner of his eye he could see the strange craft close its bay doors and move in his direction.
at May 04, 2012