3. The Wabbit and Schrödinger's Rabbits 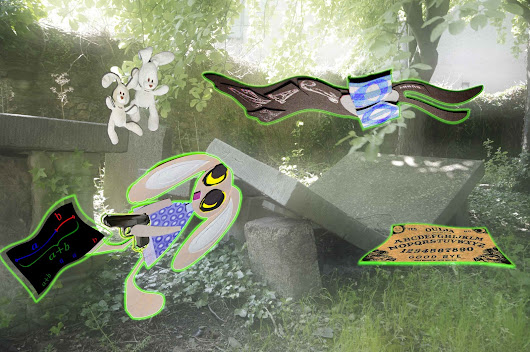 As soon as Lapinette mentioned the word  “rabbits”, both she and the Wabbit shot into the air.  "Whooooah!" said the Wabbit. "Woooooooh!" said Lapinette and she struggled to get the Wabbit’s automatic out of her frock. They both started to drift around and Lapinette's arms detached from her body and whirled too. "Over there!" gasped the Wabbit and gestured as best he could at two white rabbits sitting on a gravestone. The rabbits were having a discussion about quantum sequences and although they seemed to notice Lapinette and the Wabbit they merely continued their discussion in an animated manner. The Wabbit caught vague terms like asymptotic, fans, arcs, retracement and time extension and they all seemed to whirl around his head. But when Lapinette heard them say "time extension", something made her uneasy and she tried to fire an alarm shot in the air with her automatic. The rabbits looked across as the automatic made a soft plopping and equations issued from the barrel. They nodded sagely and murmured about the implicate order. "Hello rabbits,"  said the Wabbit as best he could. "We are only one rabbit,"  said both rabbits at once. "What’s your name?" asked Lapinette in a warbly voice. "I am Schrödinger," said one. "No, I am Schrödinger," said the other. "I’m confused," said the Wabbit. "There’s a simple explanation," said Lapinette suddenly. "When everything is eliminated, the remaining explanation no matter how bizarre is the case." "That's true," said the Wabbit as if he knew already. "The rabbits are here and not here at the same time," said Lapinette. "So what about us?" said the Wabbit. "Us too," said Lapinette.
at May 24, 2012