3. The Wabbit gets some Help 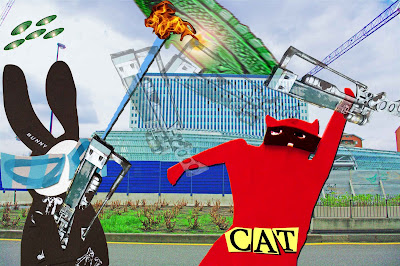 The Wabbit avoided the fire from the air and made it to the heart of the city, but still the strange craft of the Ice Mice hovered high above and the Wabbit could plainly be seen through the gaps made by public works. "Accursed developers!" muttered the Wabbit and he made for the back of the Big New Station. But he could hear a familiar voice above the sounds of the city. "Wabbit! Over here, Wabbit!" The Wabbit glanced round and caught whatever was spiraling towards him. He didn't quite remember taking aim and he certainly doesn't recall squeezing the trigger. But there was a blast of such magnitude that windows in nearby buildings shook themselves from their frames and crashed to the ground. When the explosion died away, there was a dead silence and then with an awful creaking, the craft slowly tilted and sank from the sky. The Wabbit looked at Skratch. "I'm glad to see you my friend. New coat?" he smiled. "Your requisition," said Skratch. "Really? said the Wabbit, who had indeed signed the paperwork without optimism. "And the Snaser?" he asked, stroking it. "Improved," said Skratch. "Excellent," said the Wabbit. Skratch grinned a big grin but then frowned. "What about these interlopers?" he asked, pointing a wary paw to the sky. The Wabbit saw five more vessels headed their way. "Do you know something Skratch?" he said. Skratch tilted his head enquiringly. "Just for a moment there I thought we were in trouble." said the Wabbit.
at May 08, 2012