The Wabbit and his Thoughts 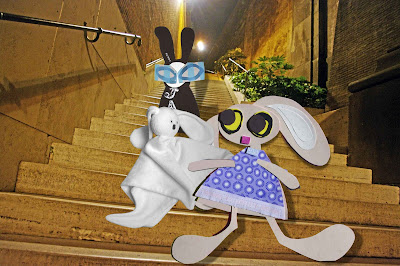 The three were in contemplative mood as they stopped on the stairs on the way home from a restaurant. Lapinette was thinking. She knew that the Wabbit adored Ghost Bunny and that his adoration was reciprocated. But she had no particular worries on that score because she knew the Wabbit and all his ways rather well. She knew that she tolerated many of the Wabbit's wilder idiosyncrasies, because she loved him and that was that. No-one else could know the Wabbit like Lapinette and so Lapinette smiled a satisfied smile. At the same time Ghost Bunny was also thinking. She knew that Lapinette knew she adored the Wabbit. But at the same time, Ghost Bunny was completely in awe of Lapinette. Ghost Bunny knew her own education and experience was at least the equal of Lapinette's. But even with Ghost Bunny's specialisation in Lacanian psychoanalysis, Lapinette represented something lovely to her that she couldn't quite fathom. Both quietly smiled to themselves. The Wabbit was also gently musing to himself but of all these thoughts he was blissfully unaware. In the depths of the Wabbit's imagination, Ghost Bunny and Lapinette had been locked in a staring competition for 48 hours. Neither would give up and their eyes were unflinching. The Wabbit let his mind drift and as it wandered, he saw himself creeping up quietly and unseen behind both of them. But just as he was about to burst a large paper bag, a voice shattered his reverie. "What are you thinking?" said Lapinette. "Nothing!" uttered the Wabbit.
at May 02, 2012