4. The Wabbit and the Stairwell Plunge 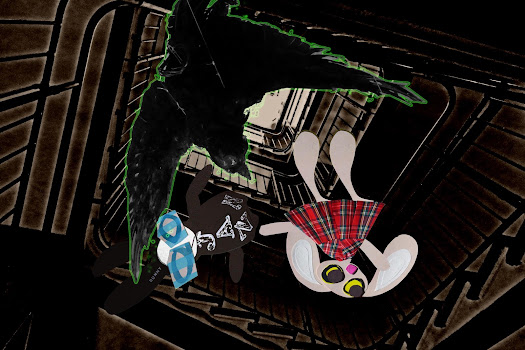 When it happened, it happened quickly. The found themselves pushed over the balustrades by a massive force. They turned head over heels - and tumbled from the rails. The Raven flew after them. He grew to extraordinary proportions and spread his wings to stabilise their fall. "Hold on, I'll get you," he shouted. But the Wabbit and Lapinette had nothing to hold on to. Caught in an invisible force, they were buffeted back and forward. Then everything froze. The Raven too was caught in the jowls of whatever it was. He tried to move his wings but they were stuck fast. "This is unusual," said the Wabbit. Lapinette was upside down and she looked around. "Wabbit, it doesn't matter what way we look, it's all the same."  The Wabbit would have nodded but couldn't. "It's an optical confusion." Lapinette corrected him. "An optical illusion." "Same difference," said the Wabbit. He tried to shrug but it was impossible. Then Lapinette began to intone a verse in a voice as deep as a thousand oceans. "Music of sombre motion. Break the spell's Power and bid the spirit fly, who has come near to dwell with us." They were suddenly free of whatever held them - but they were still falling. The Wabbit grimaced. "I didn't know you could do spells." Lapinette stuck out her paws. "Worth a try." The Wabbit stuck out his paws too. "Abracawabra!" Much to his surprise they stopped falling and drifted towards the stairs. He laughed. "You've got it or you ain't." The Raven fluttered down too. "I thought I'd wing it!" He chuckled. But Lapinette put her paws on her hips and snorted. "Everyone thinks they're very funny."
at September 14, 2022