2. The Wabbit in the Model City 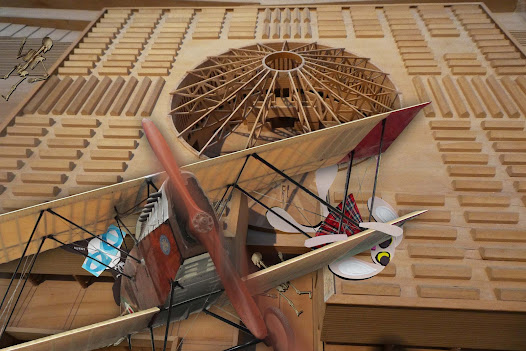 The Wabbit and Lapinette looked in awe. Lapinette scrambled onto a wing tip and looked down. The Wabbit shuddered. "I wish you wouldn't do that." Lapinette wrapped her legs round the struts. "Perfectly safe," she said. Susan the Biplane sniggered and looped around. "Whoah," said the Wabbit. He was reminded he hadn't had much for breakfast. "I see skelingtrons," said Lapinette. The Wabbit ignored Lapinette's mispronunciation because, sure enough, a couple of skeletons were lying face down at what looked like entrances to a strange building. "This looks like a model," observed Lapinette. "Big for a model," said the Wabbit. "Maybe it's a full-size model," chuckled Susan. The Wabbit mulled that over. "Can you have a full-size model?" The Wabbit craned her neck around to see more. "Yes, you can if it's made of a different material. The Wabbit shook his head. "Look for a place to land, Susan." Susan checked it out. "There's a place where I can land but I might roll over that skeleton." "He won't mind," said the Wabbit. Lapinette scrambled back into the cockpit. "We've had to deal with skelingtrons before, remember?" The Wabbit gently guided Susan in. "I was expecting an uneventful trip." Lapinette hummed a tune. "You wouldn't like it."  Susan dipped her wings. "He never likes anything, does he?" Lapinette nodded her head in agreement. "Except Prosecco and a salad sandwich."
at September 28, 2022