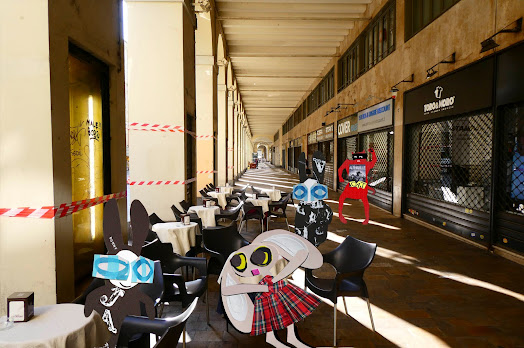 The team gathered in the porticos. Skratch was late as usual and prowled stolidly from the back. Wabsworth paused and looked on. The Wabbit had become established in the corner. Lapinette leaped out with a loving cry. "Monsieur Wabbit!" The Wabbit grinned a lopsided grin. "Zut alors, Lapinette" Wabsworth had a few words of French which he took from his universal translator. "Cou cou Lapinette. Tu es splendide aujourd'hui." Skratch was in full cat mode. "Je suis à bout de souffle," he purred. Lapinette turned and smiled. "Welcome Skratch. What was that for a sort of Adventure?" But it was Wabsworth who answered. "A repetition of subject object configurations - as perpetual becoming!" Skratch clapped but held up a paw. "Yes and the story gave freedom to a main character, the Raven. As did Edgar Allen Poe and Roger Corman." Lapinette nodded. "Perhaps our Raven was really a transformed Wizard." The Wabbit agreed. "Our Raven was a milder character than usual, but he concealed something. I've no doubt we'll find out more in due course." Skratch leaned back. "Like Goddard, you treat mainstream as a conceptual property store to be looted at will." Lapinette grinned broadly. "Perhaps the Wabbit also employs derive or detournement." The Wabbit fell about with laughter. "I'd say we did that a lot - as a deliberate policy. And we refuse to be bound by any rules." Wabsworth was most amused. He waved both paws. "Is there any rule about Prosecco?" Lapinette hooted. "Buy as much as you can."
[I'm indebted to Peter Wollen for his 2002 essay on Godard, republished by Verso.]
at September 19, 2022