6. Tipsy and the End of the Tremors 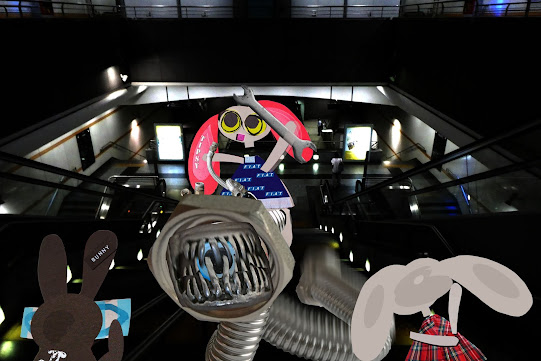 The Wabbit and Lapinette scampered back down the Metro to clean up any remaining worms. But before they got even halfway they met a worm slithering up an escalator. On its back was Tipsy. She yelled in triumph. "I found a control box!"  She waved a unit with a mess of conduit spilling from its guts. Lapinette danced with delight. The Wabbit shook his head although he could barely contain his mirth. But the worm's tail threshed in a sudden movement and both Lapinette and the Wabbit jumped back. "I can make it move," shouted Tipsy. The creature's eye bulged. Its jaws thrashed and its teeth gnashed. Tipsy bent to make an adjustment and the snake set her down. "Can I keep it?" The Wabbit grinned. "We have to investigate it first" Lapinette frowned at Tipsy. "I don't know where you're going to put it." Tipsy pouted in disappointment. The Wabbit took pity. "Oh, I have some space at the back of my hanger." He turned to Lapinette. "The snakes are mechanical - but who made them and where did they come from?" Lapinette pondered. "System SDSS J1228+1040 is rumoured to be surrounded by an ancient scrapyard belt, run by ghastly ghost robots. They collect junk spaceships." The Wabbit looked sceptical. "What would they want with us?" "Satellites, space debris, old washing machines?" suggested Lapinette. "Well," shrugged the Wabbit, "they've only got to ask. We'd clean up." Lapinette's smiled a wry smile. "I don't think they like to pay."
at January 30, 2020