2. The Wabbit and the Wriggling Worms 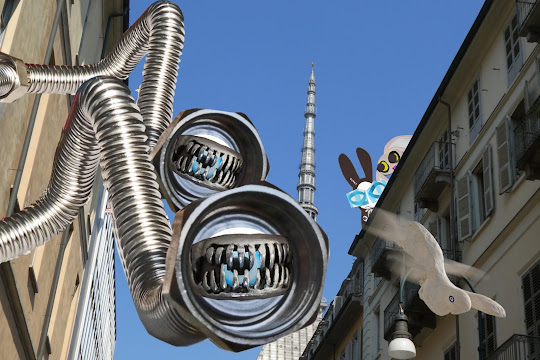 Parakalo the Dove said if there were worms, he could roust them out. So the Wabbit called Lapinette and together they went to where the vibrations were strongest. Parakalo circled as they looked up and down Via San Massimo. At first they saw nothing. But when Parakalo landed on a rooftop and scattered some debris, they felt the tremors start. Windows shook and roof tiles rattled until Parakalo let out a screech and flew faster than time straight down the street. In pursuit came worms of glistening serrated metal with heads shaped in hexagonal flanges. Inside the heads lay animal-trap teeth, but behind the teeth lay single glaring eyes that focused on whatever victim came their way. "Good grief!" said the Wabbit. Parakalo shot into the air and wheeled back. "I never saw any worm that big," he cooed. Lapinette shuddered as a worm turned its horrid head and stared at her. The worms slithered across the street and climbed towards them, wriggling from window to window. "Do you have a back way out?" she yelled. "I do," said the Wabbit. He grabbed her by the fur and headed for an open skylight. By that time the worms were on the roof and Lapinette could hear them. They made gasping sounds like a hydraulic pump, while scales of serrated metal squealed over the tiles. The Wabbit pushed Lapinette through the skylight, and turned to face the worms. He made a rude sign, then dropped down and slammed the skylight shut. Lapinette caught him as he tumbled down the stairs. He made a wry grin. "I think we've got a case of global worming."
at January 20, 2020