11. The Wabbit and the Annoying Prisoner 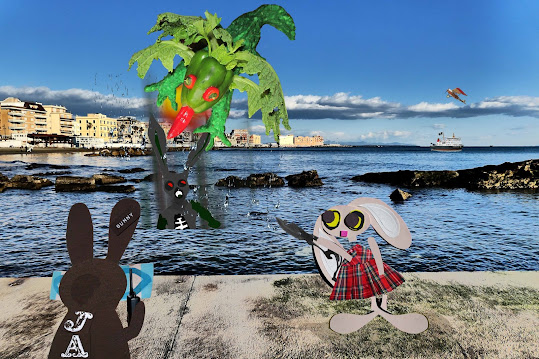 The Wabbit and Lapinette escorted the prisoner to the harbour, but with a surge of energy he wrenched free. His eyes flashed, his snout flared and his ribs gleamed through his skin. With a yell, he plunged into the sea. He was a floating body of menace. The water surged and threshed around him. "This time you were lucky, Wabbit," he shouted. Lapinette plucked her edged weapon from her frock and brandished it. But the Wabbit merely frowned. He dug out his radio from his fur and pressed a button. A roar shook the rocks and all the buildings along the bay. Terni the Dragon swooped down from the sky and grasped the Agent of Rabit by the ears. He shook him up and he shook him down. He shook him until his bones rattled. The Wabbit grinned. "Agent, you may now swim to a destination of your choosing. Tell all your kind what happened." Terni rose and hovered, still holding the Agent by the ears. He puffed a tiny ball of flame. The Agent became rather warm. Then Terni dropped him. A cloud of steam rose from the Agent's fur. "Laundry is extra," grinned the Wabbit. The Agent scowled and shook a fist. He ducked until he was hardly visible below the waves and they all watched his wake as he sped towards the horizon. Lapinette's ears quivered. "Wabbit, sometimes you go too far." The Wabbit giggled. "And with any luck, so will he."
at January 10, 2020