10. The Wabbit and the Hidden Foe 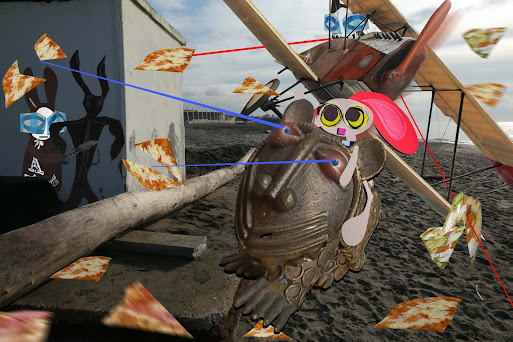 It all happened fast. Tipsy rode Baekho into the fray. Susan the Biplane swooped along the beach like a bat out of Hell. Lasers beamed from Baekho's eyes smashing some pizzas into pieces and carbonising others. Wabsworth mopped up the remainder. The acrid smell of burning pizzas floated along the beach and out to sea. Wabsworth scanned the beach, then spotted a familiar figure hiding behind a roughly constructed shed. It was one of the hated Agents of Rabit. "Go around Susan" he muttered. The Agent wasn't alone. Creeping up behind was the Wabbit. Clutching Lapinette's edged weapon close he tapped the agent on the shoulder then prodded him in the stomach. "Talk!" he whispered. "Nothing to do with me," shrieked the Agent. The Wabbit poked him harder. "Who ordered the pizzas?" He whistled a little tune and waited. The Agent sank onto the sand. "We were hungry!" The Wabbit shouted for Tipsy and she rode back. "Teach this fellow a thing or two." "Nooo!" yelled the Agent, "It was an amicable deal. They were only supposed to forage strategic garbage." The Wabbit laughed. "You can't trust any being from the Coma Cluster." The Agent was on his knees, rubbing his stomach. The Wabbit dragged him to his feet. Baekho gave him a gentle head butt. "Never take an alien delivery," he growled. The Agents now looked rather sick and he turned green. "Did you use expired coupons?" laughed Tipsy.
at January 05, 2020