3. Skratch and the Metro Worm Incursion 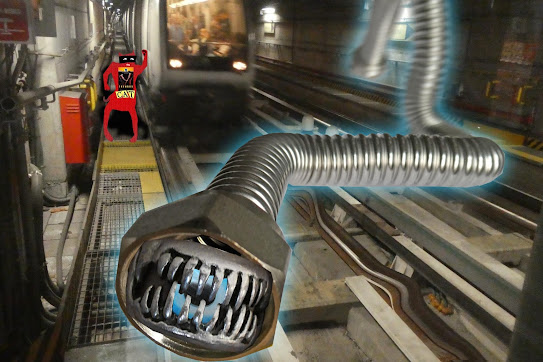 Not far away, Skratch was going to the movies for a Tremors retrospective. He'd taken the Metro to Porta Nuova aiming to pad to a nearby cinema and had settled back. He loved to ride at the front, which strictly speaking was reserved for children - but since they all knew him they shouted, "Let Skratch the Cat look out!" He was about to rise when the train started to shake and brake. The train was automatic and driverless and it juddered to a stop. Skratch peered down the line. At first he saw nothing, but when the rails began to flex he dived for a door and forced it open. He leaped down the service platform but a terrible bellowing brought him to a halt. That was when the worm dropped from the roof. It stretched and coiled and stretched back, displacing rails and strewing them across the track with an ear splitting din of metal on metal. Skratch waved passengers back and ran after the worm as it slithered round the bend towards Porta Nuova. It was moving fast and he lost sight of it. But he could hear it. He slithered to a halt and pulled an emergency handle. But the worm was systematically damaging everything metal as it passed. The handle came off in his paw. Now he heard a train coming the other way. With an extra burst of speed he caught up with the worm just as it brought the train to a halt. Passengers tumbled from the coaches and fled. The worm snapped at them with jagged teeth as they ran back to Porta Nuova. Skratch leaped straight past the worm and followed them. But he turned for a last look and yelled. "Don't think you can worm your way onto my patch!"
at January 22, 2020