1. The Wabbit and Parakalo's Report 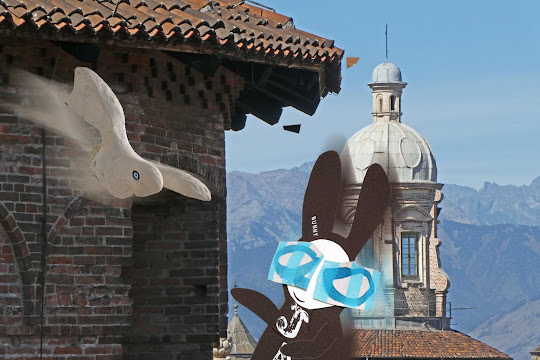 The Wabbit was searching for something to do, so he took himself up a Tower at Palazzo Madama for a good look around. He observed the Alps for a while and grinned, then he examined all the buildings, casting a critical eye over the brickwork. Nothing ever seemed particularly solid to the Wabbit and he was always a little surprised when he found everything in the same place as before. A few shards of tile fell off the roof so he mentally noted it for the attention of the caretaker. Then he spotted something white flying towards him. It got bigger and bigger and bigger until he could see nothing else. The white thing squawked in his ear, wheeled upwards, circled the tower and returned to settle on his arm. "Hello Parakalo!" said the Wabbit. The dove gripped the Wabbit's arm with strong talons and cooed, "I'm an excellent bird." The Wabbit was delighted. "How are things from your point of view, my Parakalo?" Parakalo's wings made a staccato beat that moved the heavy summer air. "I bring news of strange vibrations, which only we birds can detect." The building shook under the Wabbit's feet and a piece of masonry fell from the tower. It narrowly missed the Wabbit and he murmured, "Shake, rattle and roll? Got any ideas?" A piercing whistle from Parakalo's wings echoed all round the walls. "We think it's caused by worms." The Wabbit's look indicated sheer disbelief. "Well," cooed Parakalo, "I'm a bird. I should know."
at January 15, 2020