The Three Muses at the Superga Array 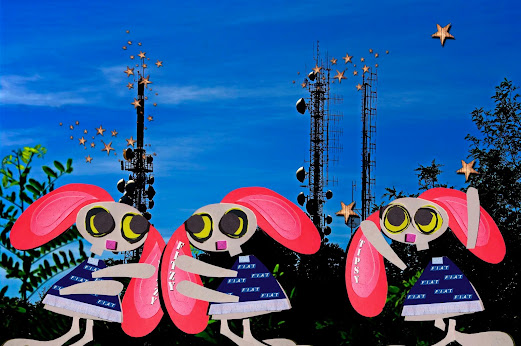 The Three Muses materialised on the hillside and began to sing. "We are the three!" shouted Tipsy. Fitzy and Mitzy swayed together and their arms chugged like steam driven pistons. "How may they tell us apart?" sang Tipsy. "They may not," yelled Tipsy. "Because we dress the same," said Fitzy. "Because we talk the same," said Mitzy. "Because we are the same," said Tipsy. "Always," shouted Fitzy. "Usually," shouted Mitzy. "Invariably," drawled Tipsy. They stopped and changed positions. "Whither goes the story?" asked Tipsy. "Whether goes the plot?" yelled Fitzy. "The Wabbit chases phantoms," grinned Mitzy. "The Wabbit's in a knot," sang Tipsy. The entity whistled in the wind and the Three Muses swayed to the tune. "The Wabbit's pursuit is hard to bear," said Mitzy, "but he likes to cling to the edge of air." "He cannot hop aside," nodded Fitzy gravely. "And neither can we." answered Tipsy. Fitzy gazed up. The shimmering sky was a blue silk purse and it looked about to speak. "So let's not annoy the deities," she warned." We might disrupt their gaiety." They hopped in synchrony to the right then the left - and then to the right again. Trapped stars shimmered on the masts. Trees moved uneasily. Branches crackled. Twigs snapped. "If we won't tell them," breathed Tipsy, "they won't know." Tipsy smiled, lifted a paw and snapped. A breeze sprang up that tore at their dresses and their ears. Then all at once they disappeared.
at December 10, 2018