11. Jenny and the Moonlit Landing 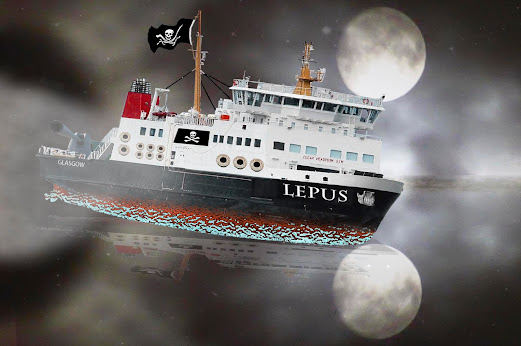 The landing was sudden, had anyone been looking. The Lepus plunged down onto a moonlit coast with hardly a ripple and she shimmered brightly like a flag in the wind. She was en route from the Sombrero Galaxy with a cargo of confiscated contraband of huge strategic value - to be delivered to the Wabbit. "Personally in person," the Wabbit had instructed. Jenny strode the bridge. "Steady as she goes," she  murmured. Her binoculars swept the horizon. "OK. Now test the Stealthicator." The Lepus vanished momentarily, reappeared and vanished again. Jenny swayed on her pirate boots and laughed. "Aha. We be here and not here." Jenny spun the wheel and the Lepus hugged the coast. The ship was invisible due to a chameleon technology that painted an object's background onto its front. So no-one on the coast ever saw the Lepus. They could only hear the ghostly thrum of diesel engines and the phantom threshing of water. Occasionally a pirate order would ring out and float across the calm sea. Now and then a bell chimed. Jenny sounded the foghorn from time to time - long menacing moans that curled round and round. On the beach, a pack of wild dogs howled and barked out to sea. Jenny smiled, consulted her chronometer and spoke into the telegraph. "Half ahead, Chief." The Lepus leaped forward but a wind sprang up and battered the coast. Vessels broke their moorings. The Lepus rolled, pitched and yawed. ""Full ahead," shrugged Jenny. "She'll no take it, Captain," groaned Chief. "Full," said Jenny, "I'll be late for the Wabbit."
at December 05, 2018