13. Panico and the Unexpected Arrival 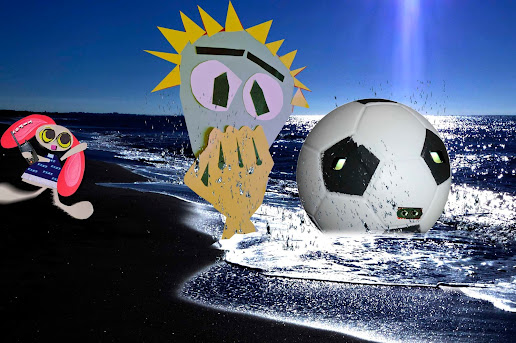 Panico looked at the pod and bit his fist. His first instinct was to scream in fright but he decided to yell instead. "Get off my beach you monster." The pod merely bobbed up and down in the water. He nudged it. It rolled. He thought he heard something move inside, so he moved back ... and bumped into Tipsy. Tipsy thrust a crackling radio under his fist. "Message for you from the Commander!" The walkie talkie beeped then whined with a distorted version of the Wabbit's voice. "Panico. Look out for the Doomsday Pod. It looks like a ..." The message terminated with a squeak. "Like a football," said Panico. He circled round Tipsy, then ran back and kicked the pod. The radio whined again. "Don't kick it," crackled the Wabbit. Tipsy sighed and crouched on the beach with her paws over her head. Two hatches slid open. The sound of angry voices drifted from the pod and bounced across the waves. "Where's your key?" said a voice. "It fell into the water," said another. "Go and get it," said the first voice. "There's scary monsters," said the second. The voices yelled together. "We're doomed!" Another angry voice boomed out "It is we who do the dooming round here!" Panico leaned close to a hatch and listened to a frantic scrabbling. Finally there was another voice. "I found it." Panico heard a metallic scraping. "It's bent," moaned the voice. There was a loud slap and a cry of pain. Panico leaned close to a hatch. "Need a hand?"
at December 21, 2018