9. Tipsy and the Art of the Header 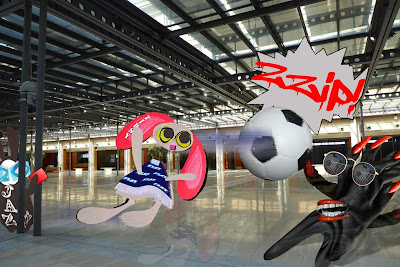 The Wabbit prised Doctor StrangeGlove from his bunker and, in empty facility near Lingotto, he set Tipsy to work. Tipsy dribbled the football the length of the building and back. She passed it to StrangeGlove but he still had no idea of what to do. Tipsy's only option was attack, so she fired the ball straight at him. StrangeGlove fell over but somehow the ball hit his head and stuck there for a while. He balanced it on the tip of his nose, then headed it back to Tipsy. "Attaboy Glovesy!" yelled Tipsy. She wheeled around and shouted to the Wabbit. "That counts as points for the Glove." The Wabbit held up a paw from the sidelines and shouted, "Play on! It's a game of two halves!" Tipsy juggled the ball on a foot, flipped it up and headed it to StrangeGlove - who copied her. Tipsy stole the ball and ran off with it. StrangeGlove followed her and stole it back, laughing until all his fingers stood in the air. They battled all day until the Wabbit held up a red card. "What did we do wrong?" asked Tipsy. "Nothing," answered the Wabbit, "I'm tired. We need refreshments." "What about an ickle alcohol rub?" laughed Tipsy. "What about a large one?" said the Wabbit.
at December 01, 2018