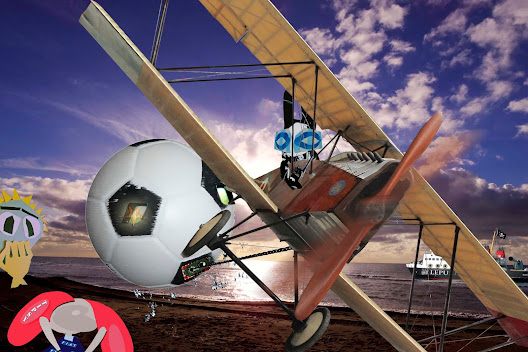 Events were as unexpected as they were sudden. Susan the Biplane swooped and hooked the pod. The Lepus steamed in with klaxons shrieking. Panico's eyes bulged in delight. Tipsy cheered and threw her paws in the air. Shrieky voices issued from inside the pod as it shuttled dripping along the beach. "Failsafe, Failsafe!" Something shimmered from a hatch, but quickly vanished. "Gotcha!" yelled Wabsworth. "Where to?" asked Susan. The pod bumped along the beach and left a jagged groove in the sand. The occupants howled. Wabsworth scanned the horizon. "Dump it along by the beach huts, we'll wait for the team to tease out the occupants." Tipsy and Panico were already running. "Holy Cannelloni!" shouted Tipsy. "Peskiest peril," yelled Panico. Wabsworth saw landing crafts leaving the Lepus and spoke into the blower. "Head for the beach hut!" Jenny's voice crackled. "Aye aye Commander. We'll crack that ball like a joke." Wabsworth touched the joystick and spoke to Susan. "Ever played curling?" Susan waggled her wings. Wabsworth released the hook and chain and the pod slid along the beach until it gently nudged a hut. It rocked slightly, rolled then rocked back. Inside the pod, something retched. "Yuk," said a voice. "Clear that up," said another. Tipsy stood with her paws on her hips and started to laugh. "They got a pizza tango!" Panico swayed and snickered behind his fist. Diesel engines chuntered in the distance so Tipsy sat down. She plucked a hip flask from her frock, swigged the entire contents down and sang, "What a swell party this is!"
at December 27, 2018