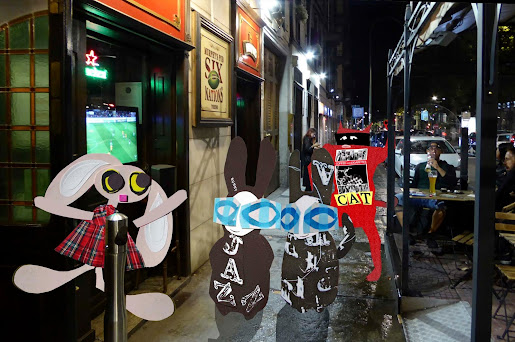 "In here, in here!" yelled Lapinette. Wabsworth looked at the Wabbit and the Wabbit glanced back. They both grinned, because this wasn't the sort of place that Lapinette frequented. "It's raining," yelled Lapinette, "and there's a special offer." The Wabbit and Wabsworth stopped abruptly. Skratch crashed into their backs. "What's that for a sort of adventure?" he meowed. "Episodic," replied the Wabbit. "Featuring seemingly random events," added Wabsworth. "And repetition," shouted Lapinette. The Wabbit peered inside the establishment. "I thought they only served beer in that place," observed Wabsworth. "English beer," added Skratch. "And they show Italian football," said the Wabbit. "It's an Irish pub, isn't it?" purred Skratch. "Phew and phew again," shrugged the Wabbit. "I think Jarmusch should make a film about it," said Wabsworth. Lapinette hopped up and down and pouted. "They said they had only limited prosecco." The Wabbit held up a paw and a waitress rushed out with four glasses and four plates of chips. They sat down. Rain dropped on the canopy. Cars swooshed past. "I didn't think you knew this place," frowned Lapinette. "Sunday football," explained the Wabbit. "Is that why you smell of beer and cigarettes on Sundays?" asked Lapinette. The Wabbit shook his head. "High spirits and bonhomie, much smoke, beer spilled on fur." Everyone laughed. Lapinette glanced at the TV. "I don't understand football."  "No-one really does," smirked the Wabbit.
at September 14, 2018