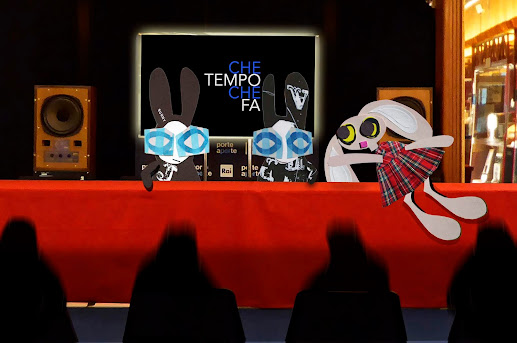 "Welcome to the show, Commander." "Very pleased to be here, Fabio. May I call you Fabio?" "Call me anything you like," said Fabio. The Wabbit smirked and winked at the audience. The audience tittered. "Commander," said Fabio. "You recently compiled all your adventures into one big bumper book." The Wabbit looked directly at the audience. "It's a dual purpose book." Fabio raised an eye and blinked. "It will tell a story and double as a door stop," said the Wabbit. "You're a rather famous rabbit now," sighed Fabio; "How does fame affect your fur?" The Wabbit droned on for a while as instructed, then ended by striking the table. "... and so fame comes at a cost." "At what cost?" asked Fabio. "About the price of a haircut." The Wabbit waited for a laugh. The audience giggled. "And that's what RAI is paying me tonight," grinned the Wabbit. The audience reaction was cut short by a long-legged lady rabbit who climbed on the table and lay along it. "Were you ever harassed by anyone, Commander?" Fabio intervened and pushed her to the side. "Leticia, that's not why the Commander is here." The Wabbit brushed him away. "All the time," he said. Letitia looked at the audience and simpered. "So what do you do about them, Commander?" "Sometimes I blow them up," said the Wabbit. The audience went wild with glee, hollering and clapping. "Or occasionally I exile them to a distant galaxy." The audience was on its feet. The cheers were deafening. Leticia crawled past Fabio until she was in front of the Wabbit. "May I touch your fur?" "Put a paw on me and I'll push you off the table," grinned the Wabbit.
[My compliments to Fabio Fazio and Leticia Littizzetto of the popular Che Tempo Che Fa talk show, formerly broadcast on RAI3 now on RAI1]
at September 07, 2018