4. The Wabbit and the Window of Nine 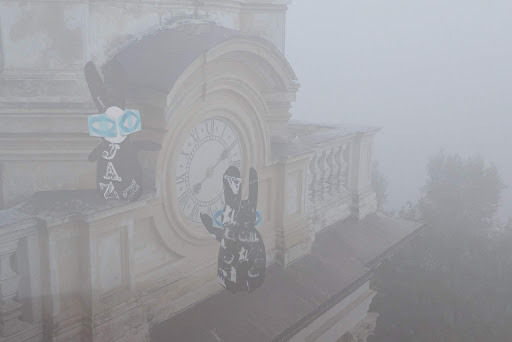 "This is like breathing cotton wool," spluttered the Wabbit. "This is my Cloud in Time saves Nine algorithm," said Wabsworth. Mist swirled round his paw as he carefully adjusted the hands of the clock. "So is there anything you want to keep in the Cloud!" he asked. The Wabbit looked puzzled. "Before time gets to Nine," explained Wabsworth. "What happens after Nine?" asked the Wabbit. Wabsworth made another adjustment. "It's more expensive," he shrugged. The Wabbit shivered. "More expensive than what?" He was even more irritated than usual since he was very cold. He leaned against the wall because there was warmth there. "Than it would cost you before Nine," continued Wabsworth. The Wabbit nodded, but he still had no clue. "So is there anything you want to store there?" Wabsworth voice was pressing. "Such as?" shrugged the Wabbit. "Information." said Wabsworth. The Wabbit thought hard. "Like all the soccer results ever?" Wabsworth shook his head back and forth. "Oh that will cost you." "Not before Nine!" said the Wabbit quickly. "OK then," nodded Wabsworth. Now the Wabbit shook his head sadly. "But I haven't got them with me." Clouds of mist swirled round the clock as Wabsworth pushed the hands close to Nine o'clock and murmured, "You might be able to get them from somebody else's Cloud." "What will that cost me?" asked the Wabbit. Wabsworth pushed the clock hands ever closer to Nine. "It will cost you five minutes." "Time is short," groaned the Wabbit. "So is money," answered Wabsworth.
at September 03, 2018