7. The Wabbit and the Size of Reflection 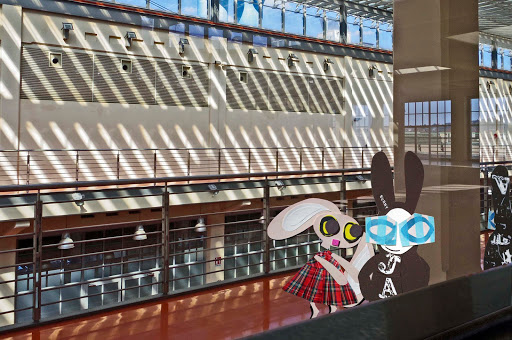 Wabsworth hopped off. He felt his work was done and he left the Wabbit to reflect. Lapinette took the Wabbit by the paw. "Did you find your point of view?" The Wabbit grinned the biggest grin she had ever seen. "It wasn't lost," he said. "Not even misplaced?" asked Lapinette. "It was here all the time," said the Wabbit. "In front of your nose," suggested Lapinette. "Yes," shrugged the Wabbit. "It was so close I lost sight of it." Lapinette considered. "It must have crept into your blind spot." The Wabbit looked down to the floors underneath and his eyes swept back and forth. He nodded. "Wabsworth could see it." "Wabsworth doesn't have your blind spot?" said Lapinette gravely. It was more of a statement than a question. "He's an android version of me," said the Wabbit. "He has a version of my blind spot but he knows it's there." Lapinette thought for a while. "So he can see more than you." The Wabbit shook his head. "He can see my version and he has his own version. That's how he knows about my point of view." Lapinette giggled. "He's much more than a reflection." "Scary," said the Wabbit. Lapinette pulled the Wabbit away. "Lets eat," she said, "Metaphysics makes me hungry." The Wabbit's tummy grumbled. "I'm a little peckish myself." Lapinette smiled in a mischievous fashion. "I know a great place with a view." The Wabbit was curious. "The Piano Bar," said Lapinette. The Wabbit waited for a punchline. "On Piano 35," yelled Lapinette.
[The San Paolo building in Turin hosts PianoTrentacinque, a chic restaurant on the 35th floor.]
at September 11, 2018