6. Wabsworth & the Outside Auditor 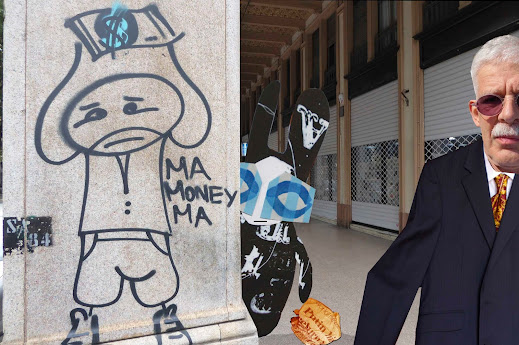 Wabsworth was an android copy of the Wabbit and knew all the tricks of the spook trade. The stranger looked like a banker, so he trailed him along the porticos, keeping a suitable distance. But in the quiet of the early hours, he had no option but to make himself visible. The stranger was well aware he had company but paid no particular attention. He was interested solely in empty properties and closed down shops. Wabsworth watched as he peered through shutters and rattled letterboxes. Occasionally he heard him dictate notes into a recorder in a strange language. "He's talking shorthand," thought Wabsworth. He grinned to himself. "Maybe he's an endangered species." His circuits whined as he ran images through a finance database. There were bankers, accountants, stockbrokers, insurers, even arbitrageurs. But no match emerged for the man in the suit. The stranger made a sudden stop and looked back. Wabsworth dodged behind a pillar out of professional courtesy. The stranger slipped a hand in his jacket and took out a crumpled note, which he dropped indifferently on the sidewalk. Then he walked briskly on. Wabsworth let him go. He bent down, scooped up the scrap of paper and tucked it in his fur. "A pizzino," murmured Wabsworth. He knew a pizzino wasn't a small pizza, it was a coded message. "Now I know who you are," murmured Wabsworth.
[Used by the Sicilian mafia, a pizzino is a small slip of paper carrying high level communications. First mentioned in the Adventures here in our early days.]
at May 21, 2018