3. The Wabbit and the Flying Bankers 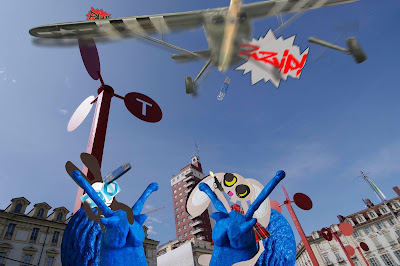 The Wabbit and Lapinette prowled the city in search of the Gangbankers but found no leads. "Can you hear howling?" asked the Wabbit. Lapinette caught a glimpse of shadow, then the sky filled with a single engine plane. The Punk Snails looked up. Their antennae wiggled. "It's them!" shouted Mo. "Take cover," yelled To," but it was too late. Lapinette's automatic spat bullets. They tore through a wing and the plane banked suddenly. "She's gonna stall!" shouted Mo. The Wabbit saw a stick of explosive heading straight for him, so he grabbed it and hurled it back. It caught the undercarriage and detonated. Fragments fell on the Snails. "Cool," said Mo. The plane spiralled and sank out sight. An explosion followed. "Super cool," said To. "They landed," laughed Mo. To nudged Mo. "A-may-zing," he drawled. The Wabbit and Lapinette held tight as the Snails slid to and fro in a slithery dance. "Gangbankers," growled the Wabbit. "Where do they get their money?" said Lapinette. "They're bankers," shrugged To. "They rob their own banks," explained Mo. Lapinette frowned. "Wabbit, is this anything to do with your Dinosaur Fund?" The Wabbit thought hard. Having observed strange activity, he'd wrenched significant monies away from a small merchant bank. The bank duly collapsed. His face was grim. "The Bank of Despond."
at May 14, 2018