5. The Wabbit and the Horse's Mouth 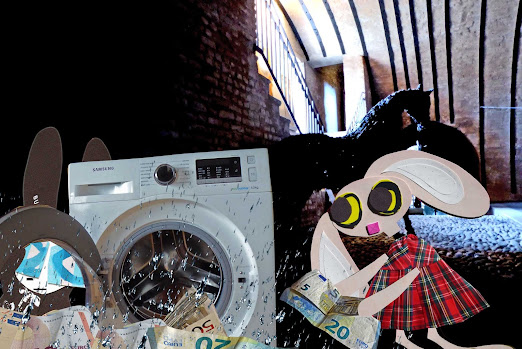 For the Wabbit and Lapinette, it was child's play to break in. "This it is," said the Wabbit. He pointed to the bottom of a flight of steps, where two statues stood guard. "Dark horses," murmured the Wabbit. "Better keep an eye on them," whispered Lapinette. The Wabbit heard a horse whinny and noticed the shake of a head. He glanced in the indicated direction. A washing machine in the corner revolved and splashed gently. The Wabbit ears twitched. He held up a paw and listened. It was playing looped sound composed of metallic chinks. Then the machine span rapidly and stopped with a shudder. Lapinette heard tinkly piano jazz. The Wabbit crept round the back, reached across and pressed a button. With a bang, the door shot open and money sprayed out. Lapinette lifted a sodden note. "These are so, so low denomination." The Wabbit shrugged. "Things went sour for the Bank of Despond?" Lapinette pondered for a second. "Maybe the money you moved broke the bank." The Wabbit frowned. ".. and they want revenge." The washing machine door crashed shut and the drum clattered. "I hear ominous ticking," said Lapinette. They backed abruptly away but bounced from a dark horse, who squealed long and hard, then snickered. Lapinette looked it straight in the flank. "Should we stay? See what comes out in the wash?" The dark horse shook his head vigorously.  "Nay," translated the Wabbit.
at May 18, 2018