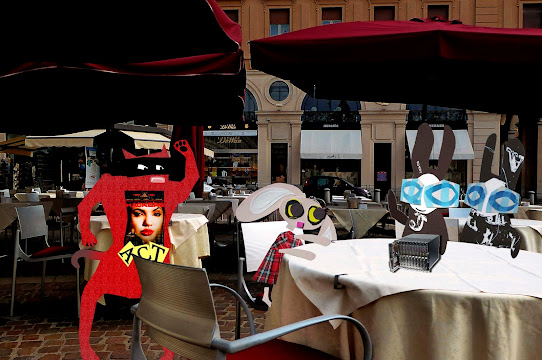 Skratch descended on the Adventure Caffè with some vigour. He was about to deliver a lecture on what he called 'kiddie movies' - but he could see the Wabbit had upstaged him. "If that's a blade server," he said, "I could have got you one at half the price." The Wabbit looked at the empty table and chortled. "It's the only server here." "And they don't take bitcoins," grumbled Lapinette. "That's a shame, now we're in the money," said Wabsworth. He rapped the table for attention. "So. What was that for a sort of adventure we just had?" Skratch waved a paw. "It was a kiddie techno-thriller." There was a long pause. Skratch continued. "We distinguish it from standard thrillers, through quantity of specific technical detail." "Do we indeed?" smiled Lapinette. "Genres are fluid," shrugged the Wabbit, as if that put paid to the matter. "But this one had a kiddie movie feel," meaowed Skratch. "What exactly do you understand by a kiddie movie?" asked Lapinette. Skratch purred. "A kiddie adventure is serious business. Protagonists must be extra brave and bold, and also staggeringly intelligent." Lapinette grinned and bowed. Wabsworth chuckled. The Wabbit nodded gravely. He quietly winked at Wabsworth, adopted a puzzled frown and poked the blade server. "How the devil does this thing work?"
[Blade server: A series of linked blades in a chassis.]
at May 02, 2018