7. Tipsy and the Hardhack Solution 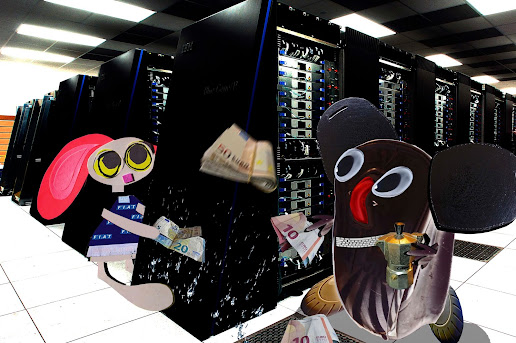 Hardhack Rat had never met Tipsy but he knew all about her. "What are you doing here Tipsy?" Tipsy's laugh was like water trickling over smooth rocks. "I have an ickle job for you," she said; "It's from the Wabbit." Tipsy pulled wads of low denomination bank notes for her frock and threw them in Hardhack's direction. She dusted her paws. "Maybe you could tell me if you have a 3D printer?" Hardhack was delighted. "Of course I have." Tipsy smiled sweetly. "Then perhaps you could print me a little dwink?" "No problem," nodded Hardhack. He pressed a button and turned to sort through the banknotes. He studied them for a while, then studied them some more. Only then did he look up. "What is the nature of the financial inquiry?" he asked. Tipsy pouted. "The Wabbit wants to know where the notes have been." "They look as if they've been washed," sighed Hardhack. Tipsy giggled. "The Wabbit says dirty money has its very own indelible trace." Hardhack thought the Wabbit said a lot of things, but he took the notes nonetheless. "I'll have to scan them and subject them to rigorous probing." "Probe on," suggested Tipsy.  Hardhack smiled and lifted a coffee pot. "Your drink is ready." Tipsy looked at the coffee with horror. "It's spiked with amaro," grinned Hardhack.
[Background photo credit:Argonne National Laboratory under the specified license]
at May 23, 2018