9. The Wabbit and the Ghost Control 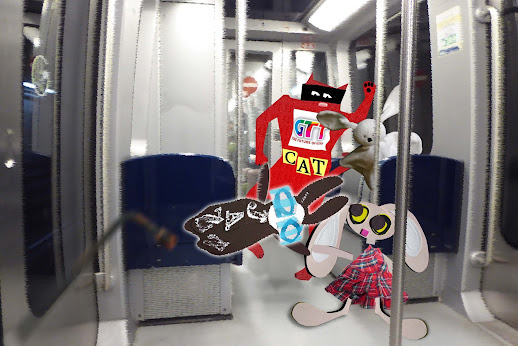 How the Wabbit managed to do what he did, no-one is ever likely to know. Lapinette felt disheveled. Skratch looked on in wonder. The tyre iron continued its trajectory and lay spinning on the floor. The Wabbit arced nonchalantly to his feet and looked directly at Ghost Bunny. Ghost Bunny decided against vanishing and instead shrank to a reasonable size. "You're not in control of this train, Ghost Bunny," said the Wabbit. It was a clipped tone of voice that Lapinette recognised. She shrugged and leaned to inspect her new frock. "Who is?" she asked. Ghost Bunny smiled weakly. "The train is under automatic ghostly control. It's on trial for the Ghost Expo." Lapinette found the rip in her frock and scowled. "Invisible mending," suggested the Wabbit; "I have a woman in Ecclefechan." Lapinette bared her teeth and the air sizzled. Skratch meaowed politely for attention. "How do we stop the train?" "We can't!" said Ghost Bunny. The Wabbit glared. "I can't go riding around all night on ghost trains." Ghost Bunny fluttered hauntingly and mustered the most soothing voice she had. "We have to wait until the ride is over." Lapinette had an idea and held up a paw for attention. "Why don't we pull the alarm lever?" This met a cool reception, but the Wabbit shrugged and hopped forward. "I always wanted to do that .."
at October 04, 2017