1. The Wabbit and the Shutter Stop 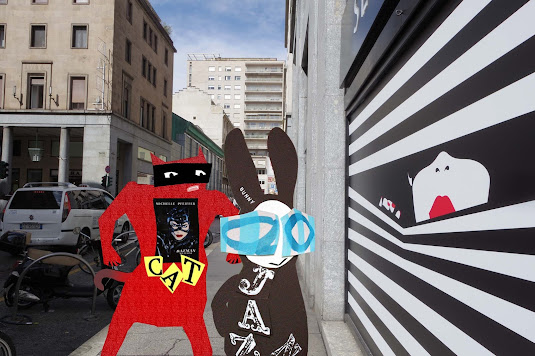 Skratch the Cat chased the Wabbit along Via Gramsci at great speed. But suddenly the Wabbit stopped and stared at a shuttered shopfront. Skratch narrowly avoided colliding and let out a painful meow. "Wabbit, where are you going so quickly?" The Wabbit eyeballed the shutters and hummed vacantly. "Hopping an aimless hop, loping an aimless lope." "It's nearly Hallowe'en, Wabbit," said Skratch, "We've no arrangements for our party." The Wabbit continued to scrutinise the mural without reply. "I couldn't think of a location," continued Skratch. He watched the Wabbit closely and went on. "So what would you prefer? Claustrophobic, wild and wanton, subterranean or deeply forested?" The Wabbit stared at the figure in the mural and raised an eye. There was quite a pause. Then the figure whispered, "Wild." The Wabbit nodded. "Wild," he repeated. Skratch purred. "Wild it shall be, Commander. What kind of wild?" The mural whispered again. "Wild Bunch." "Mmm? Wild Bunch?" murmured the Wabbit. Skratch pricked up his ears. "Then we'll need a lot of space." he meowed. The mural rattled the shutter and screeched, "The Hellfire Club!" Skratch was overjoyed. "Just what I was thinking, Wabbit, shall we confirm?" He waited for a response, but none came. So he poked the Wabbit in the ribs and the Wabbit shot in the air. "Good grief, Skratch!" he yelled. "I didn't know you were there..."
at October 29, 2017