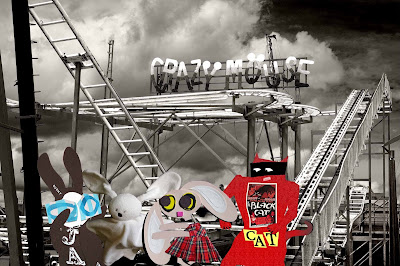 Ghost Bunny ushered the team from the fairground with many kind words and the promise of a lovely welcome on future occasions. "I do hope you liked our special preview," shrieked Ghost Bunny. "Do come again and bring all your friends." The Wabbit hadn't the heart to be vexed. He knew he'd played a few tricks in his time, so he changed his frown for a smile and listened carefully. Skratch purred enthusiastically to Ghost Bunny. He waved his paws, exclaiming that her Ghost Train escapade shot the very rubric of funfair carnivality - and furthermore, transcended post-modern fairground aesthetics. Ghost Bunny squealed in delight. Lapinette however was not so pleased. She argued that her irreplaceable new frock was ripped. The high cost of repair would be cruel and unusual. Ghost Bunny smiled and cast a ghostly glance across the frock, perfectly mending it with all the invisibility a ghost could muster. Lapinette hopped with joy, but a sudden squealing and shrieking from the fairground ride made everyone jump. The Wabbit turned to look. The ride was disappearing and so was the fairground. Ghost Bunny waved, bowed and vanished too. Lapinette and Skratch were next. "Damn spirits are we all," shrugged the Wabbit with a grin. Then he popped into nothing, like a bubble.
["Drops the awnings": Carnival slang for closing for the night. Carny, Circus,Sideshow & Vaudeville Lingo Wayne N. Keyser]