11. The Wabbit and the End Protocol 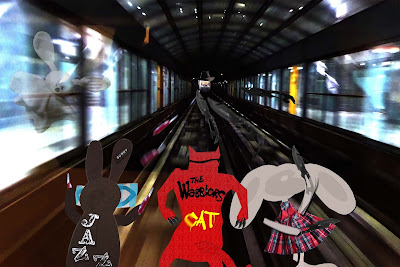 When they hit the track they bounced and rolled. A station seemed to flash past and reappear, but it stabilised and shimmered with a fierce blue light. Beyond the barriers, Ghost Bunny waved frantically and pointed. From the distance, another train loomed steadily towards them. "It's got a hat on," shouted Lapinette. She drew several edged weapons from her new frock and recalling the recent rip, threw them all in rapid succession. "That's the Devils hat!" yelled the Wabbit. His fur held an impossible supply of Swiss army knives and he threw them all. Blades sliced through the fetid air. The train glowed and picked up speed, howling like a horde of hungry babies. "The Devil's hat usually comes with the Devil in it," announced Skratch. He detached a series of serrated claws and sent them fizzing down the tunnel. The train slowed and stopped. Lights flickered, engines sighed. "Gotcha!" hissed Skratch. Engines whined and the train lurched forward. Headlamps flickered a message. "Morse," said Lapinette. The Wabbit narrowed his gaze and read the code. "It says, 'Abandon'." "It can't be just abandon. Abandon what?" scowled Lapinette. The signal started again. The Wabbit concentrated, scratched his head - and shrugged. "Abandon Hop."
at October 09, 2017