10. The Wabbit and a Possible Black 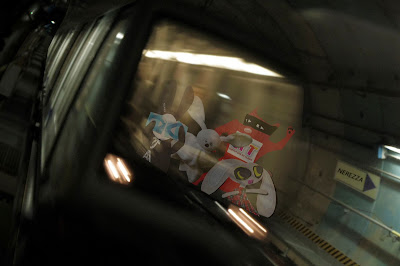 The Wabbit pulled the alarm lever. Nothing happened. He hopped to the end of the compartment and tried another. A loudspeaker hummed and spoke. "Ghostly ghastly. Ghostly ghastly. Ghostly ghastly." It wouldn't stop. The train jolted and shot forward. Lights strobed past. Stations flew by like jets. And all the time, the loudspeaker crackled its spooky message. The Wabbit covered his ears and hopped fast as the compartment tilted dangerously. "We shouldn't touch the walls," said Lapinette. The Wabbit raised a questioning eyebrow. "We could disappear into a possibility dimension." The Wabbit flinched. "What does that look like?" "Impossible to say," said Lapinette. Skratch the Cat signalled to the Wabbit. "Commander, things are fading out." The Wabbit looked up and he could see the roof of the tunnel. Bit by bit, the train became invisible. But the loudspeaker continued. "Ghostly ghastly. Ghostly ghastly." Ghost Bunny's eyes crossed. "I'm going to haunt off, see what's going on." She became invisible too. Now they seemed to hurtle through the tunnel independently, desperately avoiding the walls. Lapinette glimpsed a sign as it flashed past. "Nerezza!" she breathed. "What does it mean?" asked Skratch. The Wabbit shrugged. "It means dark, Skratch. But not as we know it..." "Fade to black," quipped Skratch. "But you're a cat," said Lapinette; "You can only fade to grey."
at October 06, 2017