8. The Wabbit and the Cynical Switch 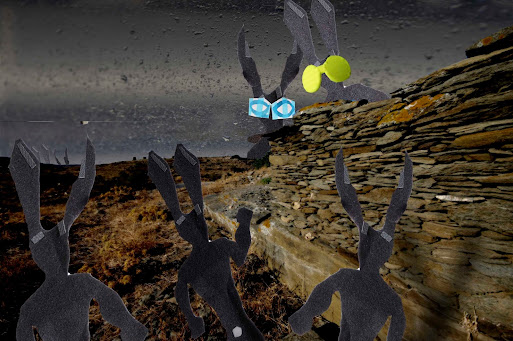 The Wabbit felt strange to be an Agent of Rabit, but Space Traveller seemed to be enjoying himself. They wiggled their pointy ears and practiced snickering just like Agents. "Get these gophers," sneered the Wabbit. "Scrag their scroggles!" said Space Traveller, a bit too loud. Suddenly there were three agents throwing out their chests and snivelling. "Who are you?" they shouted. The Wabbit looked over the wall. "We're new." "We just got here," added Space Traveller. "No-one said you were coming," said an Agent. "Last minute thing," smiled the Wabbit; "In consequence, we are hopelessly raw and don't know our asses from our elbows." Another Agent shook with annoyance. "It's always the same when we need help." "But we're so cute," simpered the Wabbit. The three Agents huddled, then emerged to address the pair. "There was one interloper. Now there are two." "I can see them," said the Wabbit.  "Where?" sneered the Agents. "Over there," said Space Traveller; "You can make out their ears." The Agents became agitated. "We can't see them." The Wabbit pointed to his glasses. "Special spectacles." Space Traveller tapped his. "Wearable specnology." "Yes, I see ears on the horizon," exclaimed an Agent. "Best follow them," suggested the Wabbit. "Keep your own ears to the ground," advised Space Traveller." The Agents made off at speed and disappeared. "We'll look after your stuff," shouted the Wabbit.
at July 19, 2017